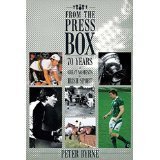 From the Press Box 70 years of Irish Sport

Peter Byrne gives the reader a ringside seat to the key sporting clashes of the past seventy years, beginning with the Republic of Ireland's historic match against England at Dalymount Park in 1948 (which was followed by a state reception for the England team, hosted by Irish Prime Minister Eamon de Valera) and ending with the crowning of Kilkenny as All-Ireland hurling champions in 2012. Byrne writes superbly on all of Ireland's sporting heroes of recent times, including greats such as Ronnie Delaney, Roy Keane and Brian O'Driscoll.