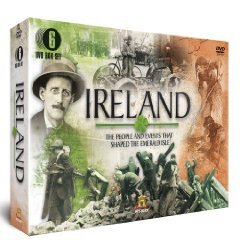 From Cromwell to J.P Dunleavy enjoy a fascinating journey through the history of Ireland

Disc 1. Cromwell - Conquering The Emerald Isle 1 x 45:00 min When the Irish Royalists rose up against English rule, Oliver Cromwell invaded Ireland to quash the rebellion. Cromwell was only in Ireland for 40 weeks, but his bloody, brutal campaign cast a long ugly shadow. He felt justified in ordering the massacre of nearly 3,500 soldiers and civilians because they continued to defend the city of Drogheda after the walls had been breached. With ruthless thunder, he eventually brought Ireland to its knees, conquering the nation for the English Crown.

Disc 2. Famine to Freedom 1 x 50:00 min The Great Irish Potato Famine of 1845-1851 saw an estimated 1.2 million people die of starvation and disease and another 1.5 million emigrate to other countries such as Canada and the United States. The devastation and the loss of family members was unparalleled. The force behind this disaster was a deadly biological agent, a pathogen so strong that it had the power to take out the potato crop of a whole country in just one month!

Disc 3. The Irish in America 1 x 96:00 min Powerful, moving and insightful, this unique documentary tells this story of the Irish immigrant experience in America from the colonial period of 1650 through the turn of the 20th century. We profile the Irish involvement in the American Revolution, the Age of Jackson, the Mexican and Civil Wars, the Calfornia Gold Rush and the taming of the American West. It is a tale of how resilient people turned poverty into prosperity and changed the American continent forever. Contrasted is the suffering of the Irish living at home under British Rule and their fight for freedom and justice.

Disc 4. James Joyce 1 x 44:00 min Author of Dubliners, Ulysses and Finnegans Wake, James Joyce was one of the greatest and most controversial figures of the 20th century. His works were so graphic in detail, they were banned as obscene and he was prosecuted for indecency. Every friendship he made destroyed by his contempt for others and every relationship consumed by jealousy. A voyeur and pornographer, Joyce was exiled and condemned from his native Ireland as a satanic blasphemer. But to others James Joyce was a tormented genius.

Disc 5.Curious Journey - The 1916 Easter Rising 1 x 65:00 min In 1973, Kenneth Griffith, the renowned documentary maker, gathered together a group of veterans of the Easter Rising. Almost half a century after those terrible events, this highly diverse group - branded terrorists by the British in their youth - gave their own account of what is was like to live through those turbulent times. It is a powerful and heartfelt testament to nine brave men and women who risked their lives for their country.

Disc 6. J.P Donleavy's Ireland 1 x 50:00 min Born in Brooklyn, New York, of immigrant Irish parents, iconoclaustic author James Patrick Donleavy undertakes an emotional odyssey around his adopted homeland. This touching programme offers a unique glimpse into his life and literacy background from his hedonistic days at Trinity College to his creative roots at Kilcoole where he wrote his controversial first novel, The Ginger Man. It is a heartfelt journey of remembrance that reveals a beguiling country of breathtaking beauty.