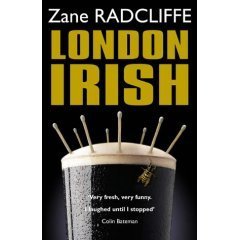 London Irish by Zane Radcliffe (Paperback) London Irish is the blackest of comedies, blacker than the pint of Guinness that graces its cover and every bit as enjoyable! It's the story of Bic (his 'pen name'!) who runs a crepe stall in Greenwich as Britain prepares to celebrate the new millennium. Bic is out of sorts with London (the tourists, the lack of clean air) and Radcliffe perfectly captures that thing that a lot of us non-native Londoners feel - that there must be a better life outside the M25. I've lived in London for 4 years (originally from Galway) and can relate to Bic's desire to just pack a bag, go to an airport and take the first flight to 'Whoknowswhere'. But just as Bic decides to cut loose from the city and return to his homeland to start an ostrich farm, he meets Roisin and his world is turned upside down. From this point just try and put the book down. I couldn't. It's fast-paced and furious but always funny. And Bic's dog (Dunc, so named because Bic had rescued him from the Thames when someone had tried to drown the puppy!) is one of the finest comedy canine creations! Even though the levity is high, London Irish contains one of the most poignant expressions of a terrorist atrocity that you're likely to read. Slainte, Mr. Radcliffe!!